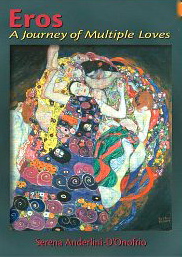 Dear Earthlings:
The year of wonders is what 2012 is supposed to be.  Yours truly offers snippets of her favorite books.  All on yesterday’s forbidden themes.  Let’s see if their mysteries are revealed.
Eros is a story that staved off the loneliness of her first years in the Caribbean, when she was missing her former Matrias, California and Italy.
Can a “no” become a “yes”?  That’s one of the main themes.  Many a “no” has turned into a “yes” since time immemorial.  Yet the very question became taboo.  Why?  If we respect a “no” that becomes a “yes,” we will respect a “yes” that becomes a “no.”  Isn’t that a win-win?  A world where love can change our minds is a world where love abounds.
Here are yours truly’s reflections back in 2007.  Eros: A Journey of Multiple Loves, has the full story.

Education is the heart of democracy.  And that includes education to love.  It comes in many forms.  Including learning about Eros and journeys of multiple loves.

Eros: A Journey of Multiple Loves was a Lambda Finalist in 2007.  It is now being considered for translation in to Spanish by a press in Madrid.  Access to this memoir would be a great gift to Spanish speakers across the globe.  If you agree, leave a comment and we will let the publisher know.  Gracias!

Did you enjoy the post?  Let us know!  Yours truly appreciates your attention.  The comments box is open.

Come back!  And stay tuned for more wonders.

Serena Anderlini-D’Onofrio, PhD
Gilf Gaia Extraordinaire
Author of Gaia, Eros, and many other books about love
Professor of Humanities