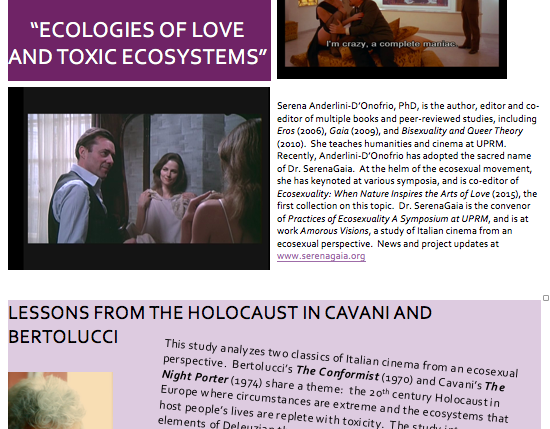 In the spirit of challenge and renewal at UPRM and in Puerto Rico, the current course in Italian Cinema opens its doors to invite you for a CLASE ABIERTA event.

Please join us on Tuesday, November 1st at 5:30-7:00 PM in Chardon 226, for a presentation from the research project Amorous Visions, followed by a bilingual Questions and Answers period.  Look above or download the descriptive flier here.

the years.   What does it mean to appreciate, participate, enjoy, observe, learn from, and think about the art of the 20th century that studies the relation of “time, space and movement,” as Gilles Deleuze put it?   Students have been my most valuable teachers.  From them I’ve learned to look at cinema anew.  My study of ecosexual perspectives on Italian cinema is a direct emanation from this experience, and has evolved with multiple support from internal and external sources.  It is time to share about it with our local and regional intellectual community.

Italian cinema is a particularly fertile terrain for this epistemic inquiry.  So many “sheets of the past” emerge from the mise-en-scene of art cinema from Italy.  So many personal, intimate scenes invite a reflection on how our amorous lives are impacted by the ecosystems that we live in.

In this invitation, we will present a study of two classics of Italian cinema from the 1970s.  Remember The Conformist and The Night Porter?  Very ecosexual.  Very Deleuzian.  Right?  If you’re a cinephile, you cannot have missed them.  If not, this is a perfect time to meet these two majestic films.  Students in the current Italian Cinema group are quite advanced in Deleuzian and ecosexual approaches to cinema.  They are excited to welcome visitors and other participants for this special CLASE ABIERTA EVENING.   Many of them will surprise you with their participatory questions and observations.

Join us in animating the evening.  Participate and invite your own students.  Below please find more information about the event.

Ecologies of Love and Toxic Ecosystems:

Lessons from the Holocaust in Cavani and Bertolucci

This study analyzes two classics of Italian cinema from an ecosexual perspective.  Bertolucci’s The Conformist (1970) and Cavani’s The Night Porter (1974) share a theme:  the 20th century Holocaust in Europe where circumstances are extreme and the ecosystems that host people’s lives are replete with toxicity.  The study integrates elements of Deleuzian and film theory, political history, the history of cinema, and cultural discourses about fluid and inclusive practices of love like bisexuality and polyamory.  It focuses on the relationship between mise-en-scène, or representation of the physical, emotional, interpersonal, and political ecosystems where characters’ lives unfold, and the styles of sexual and amorous expression they deploy in their intimate scenes.  Its approach is unique.  It empowers a vision of how the energy of love behaves in toxic ecosystems, surviving as love for love or erotophilia.  When the auteurs explore the inner landscapes of the films’ protagonists via Deleuzian time-image sequences, the sexual fluidity and amorous inclusiveness present therein become visible as a way to save love for love in the midst of extreme ecological toxicity.  In Bertolucci the fear of love prevails:  Marcello kills the woman who inspired love in him.  In Cavani this expansive sense of love manifests the imagination of a world where “it is safe to live because it is safe to love.”  The author claims that Cavani succeeds because her diegetic structure is organized rhizomatically.   The inner landscapes of multiple interconnected consciousnesses are made visible in the interlocked time-image sequences of her dyad Max and Lucia.

The article that corresponds to this presentation will be published in Rhizomes: Cultural Studies in Emerging Knowledges, an open-source peer-reviewed journal.   It uses numerous series of stills from both films.  The conference presentation uses a series of clips.  The latter will be presented in a 60-minute format, followed by Q & A sessions.

Stay tuned:  In the Spring of 2017 we also plan a more formally organized event about Amorous Visions.  It will be widely announced and open to the wider Arts and Sciences community at UPRM, and beyond.

Marrone-Puglia, Gaetana.  The Gaze and the Labyrinth: The Cinema of Liliana Cavani.  Princeton University Press, 2000.

Not Sure How to Vote?