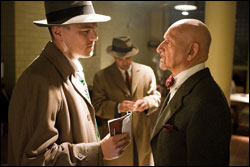 A while after the conversations of ‘What’s in a Name?’ G and I resume our calls.  We talk about movies.  ‘T is the season, after all.
“Teaching film helps,” G says as soon as we connect.
“Why is that?” I ask.
“Well, when you go to the movies, you activate a little mechanism in your brain and it helps you to connect the dots . . .”
“Dots? What dots?”
“Dots between movies and books you’ve read, for example.”
“As in?”
“As in, Shutter Island and The Shock Doctrine, for example.”
“Shutter Island, Marin Scorsese’s latest, and Naomi Klein’s book about the Chicago School and it break-the-economy-and-control-the-people-politics?”
“Uhu.”
“Tell me more . . . “
“Let me tell you the whole story then.”
“Ok.”
“So yesterday we were bound to see Crazy Heart in San Juan, and the Fine Arts Theater, when we find out that the program has changed and we need to adjust our plans.”
“Who was your company?”
“Melvin, the leader of my Area Oeste LGBT friends group here, a sophisticated speaker, a discussant, a great facilitator.  I’m so happy to have his company, you know, it’s ok to go to the movies by oneself, but the company of a sensitive person makes puts the experience on a completely different level.”
“Sure.”
“So of course we watch the whole film then we try to figure out if Teddy/Lewaddis is really honest and sane or really insane and a criminal.”
“Yes . . . “
“It’s a story about an asylum on this island off of Massachusetts where apparently some human experiments were going on in the 1950s, on human brains: how to treat them with electroshock therapy and lobotomy, how to persuade sane people that they are not only insane, but also criminals with a shady history of murders whose memory they are trying to push away.  The idea is that these therapies will persuade the patients not only to adopt the life stories and identities that psychiatrists are fabricating for them, but also that they will go along and help those in charge to play the game.”

“Oh, those are much better.  He is not what I’d call a beauty.  Not enough sensual for that, to my taste.  A tad too intense.  But his looks have improved because now he knows what to do with what nature gave him much better than before.”
“So, it was a nice evening after all.”
“It was great.  We spent time discussing the movie, figuring out the plot, the various hypotheses for interpretation, put our brains together to figure out what we saw.”
“Did you miss Crazy Heart?”
“I did. A bit.  I explained my friend why I wanted to see it and we agreed to stay tuned.  Talked about our emotions, what’s happening in our lives and what feelings are dominating. I always find movies good for that. We made plans for more movie days next weekend.”
“Until that time then,” I said as we prepared to end the call.
“Arrivederci.”
“Arrivederci, my Italian friend, arrivederci.”
http://polyplanet.blogspot.com
Please follow and like us:

A “Masterpiece?” OMG . . . I’m humbled. Really? – Review of Gaia and the New Politics of Love – The Journal of Bisexuality