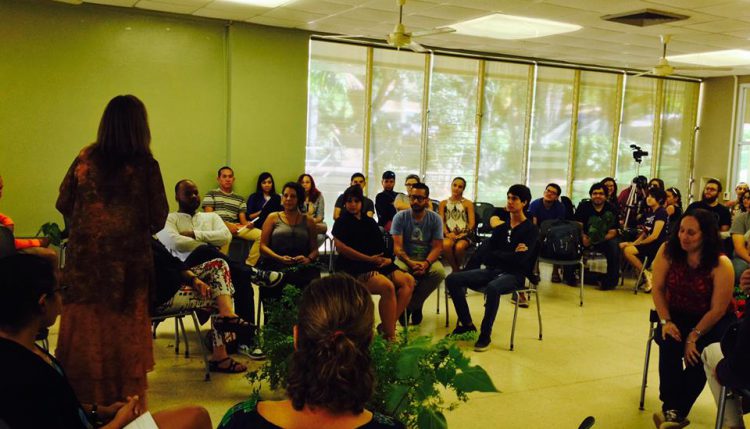 Yay! May Day and the Experiment of Teaching Justice – “Debts” and Humanities First Hybrid

Rejoice with me!  Today, May 5th, 2016, I found out the requirement has been waived.  My two first hybrid sessions of H-Humanities 3112, Humanities and Love, are now being offered to all interested UPRM students.  I hear they filled up in a flash.  They’ll start in August.  I’m really happy to offer this service and learning opportunity to students who love to learn online.  Yay!

Read more about the saga below:

Today, April 30th, 2016, marks the first anniversary of my lynching by the Department of Humanities at UPRM.  That was really a very traumatic time.  I felt so bad I wanted to retire.  What was the big fight about?  Teaching in a part-online modality called “hybrid.”  The gory details are in two affidavits filed with the authorities of the campus.

A year later, my priority proposal has been approved of.  Woooow!  It’s H-Humanities 3112, from early modern to present time, with a focus on love.  The historical content– all freshly produced from what I call a public-private alliance between my 3WayKiss non-profit and the UPR–is all online.  It’s now a gift to the creative commons for those who believe in knowledge as love.  Enjoy it here!

The Department even listened to the Proposal for Revitalization I designed, called “Action.”  The Prezi I made for the occasion is really fun.  You can watch it here: it’s public.  Colleagues listened carefully and a bunch of intelligent questions came after. What a great sign!  The gift economy is rich with imagination, and I do hope new life emanates from this proposal study.

However, as it turns out there is still a caveat.  Apparently, the Office of Academic Affairs now wants me to run a human experiment with my newly approved hybrid modality.  I think it’s a bad idea, and have expressed such.  Why?  Well, for any given course, a presential session must run parallel to any hybrid one.  That’s for purposes of comparison, authorities claim.  But the reality is that when teaching in a hybrid modality, to keep comparable standards and obtain comparable results, one must run a much more complex battery of tests and exams.  Memorization is not what does it.  Appropriate online tests are designed to train students in activating their minds and in thinking about what they’re studying. The tests are super time consuming and could never be run in class.  They really engage students who love to learn online.

So basically the human experiment Academic Affairs recommends is on in which one has to treat one group different from the other.  Now, I’ve never cared to be known as an easy-A professor.  But there hasn’t been a time when students have not found me to be very competent and just.  The hybrid modality I designed intended to alleviate their experience of learning in a degraded environments like our building, infested by dirty air-conditioner filters, fungi, asbestos and rats.  Something from which they suffered just as much as I did.

Now, if I did what Admins recommend,  I would probably risk my reputation as both competent and just, while I would also lose the best students’ trust.  What’s more, this human experiment would probably result in turning young minds off the desire to learn that spontaneously arises from their loving, enchanted minds.  Ouch!

One can certainly tell that the rules for online teaching modalities have NOT been designed by those familiar with the practice.  I can very well teach all my H-Huma 3112 sessions as hybrid next semester.  Students will be delighted, and that’s why I asked.

In a Puerto Rico crumbling under a debt much of which was fraudulently acquired, one would hope that common sense would prevail. There’s plenty of past and future session in the conventional style for comparison.  Wouldn’t this be a great time to support one another, and make the best of what little we have left?

May Day tomorrow is a time when we the people of the island  prepare for gathering in front of the Capitol, in San Juan, to reclaim our right to be treated like citizens.  I have my body sign ready.  It says: The people of Puerto Rico negotiate the debt.  Yes, the people and the land count.  More than whatever mess was engineered by financial capital and is now called “debt.”

A public university has the responsibility of behaving in ways that honor its commitment to knowledge, impartiality, and justice.  Beyond any ill fated or poorly conceived regulations.  I hope the Admins in question model this with their practice.  My right to be a teacher that’s competent and just is sacrosanct.

I have a request out to the Dean of Academic Affairs.   I hope the response comes fast.  Citizenship is a way of being one acquires when one stands by the principle that the laws and rules are made for the people and not vice versa.  Let’s practice that now!