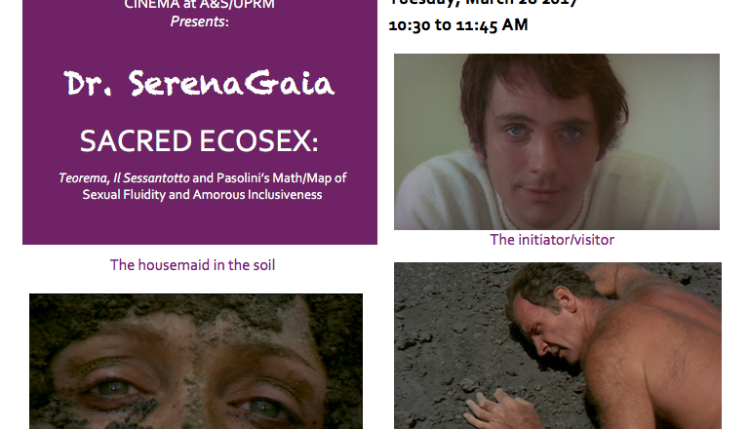 Here’s one more event coming up for me.  Sacred Ecosex.  Wonder what it is?  Join us!  It will be fun.  And you’ll get a sense of what that famous year of 1968 really represented for Italy and Europe, from one of the most unconventional film directors of Italy, Pier Paolo Pasolini.

This study applies the art of analytical observation to Teorema, by Pierpaolo Pasolini.  This classic of Italian cinema was released in 1968.  This year of paradigm shift, also known as il sessantotto in Italy, beheld a cultural revolution that attacked the malady of the Oedipal Syndrome.  The film captures the zeitgeist of the new era and connects the pervasive effects of this syndrome to the abuse of the partner we all share by the extractive industries.  The movie places a bisexual, polyamorous visitor at the center of the diegetic structure, where he initates members of a nuclear family who are victims of the Oedipal Syndrome into the practices of ecosexual love.  With this prophetic movie, education to sacred ecosex begins.  The film taps into the director’s familiarity with the Roman male sex-trade scene to sacralize sex as the magic encounter of two human ecosystems.  When Pasolini moved to Rome

from his native Friuli, his sexual life became organized around this scene.  The film maps the way the sessantotto experience flipped both the filmmaker’s consciousness and the conventions of amorous expression of the era.  The desert represents the force of ecosexual love: the Earth appears naked in the segments that suture the different consciousness explored in the film.  Paolo, the father, connects with the Earth’s metabolism when his heart beats next to it.  Emilia, the housemaid, occupies the soil of the periferia to save its fertility from pervasive concrete.  As “desert,” the partner we all share enters the equation of Pasolini’s theorem.

enaGaia, aka Serena Anderlini-D’Onofrio, PhD, is a cultural theorist and founder of 3WayKiss.  Her prophetic books have inspired readers around the world, including Gaia (2009), Eros (2006), and Ecosexuality (2015), the first collection on this topic.  Dr. SerenaGaia is a professor of humanities and cinema at UPRM, a renown scholar and public speaker.  This presentation comes from Amorous Visions, her book-in-progress on ecosexuality and Italian cinema.  The research for this study has been externally funded by UCHI, and has been generously supported by Arts and Sciences at UPRM.

It will be a 40-minute presentation with film stills and clips.  Followed by an open active learning session with Questions and Answer.  Many students will be in attendance, including groups from courses in cinema, humanities, and literature.  Everyone is welcome to join from the campus, area, and communities.  To download a flier, go to this link.  We look forward to welcoming you!

Fellow at the Humanities Institute, University of Connecticut, Storrs (2012-13)
Project: “Amorous Visions: Ecosexual Perspectives on Italian Cinema”
Please follow and like us: