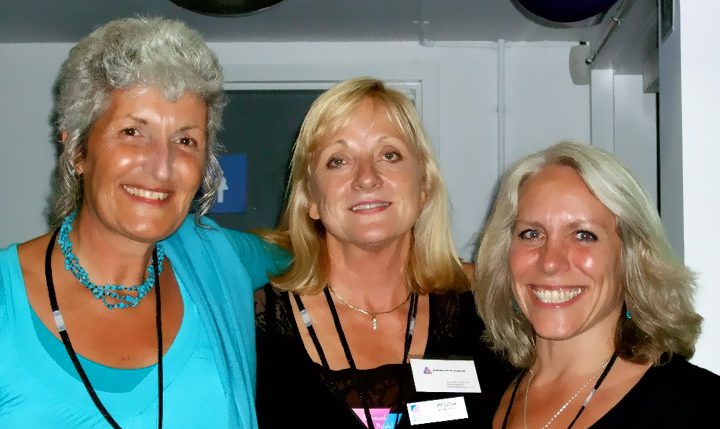 Bi ReConNaissance:
An Introduction to BiTopia, Selected Proceedings from BiReCon
Serena Anderlini-D’Onofrio
Bisexuality: Meanings and Contexts
As public discourse manifests around bisexuality, the meanings of bisexuality gradually weave together into a multivoiced discourse where they become symbiotic with one another, as in a permaculture garden.  At the same time, the contexts, disciplinary and otherwise, where bisexuality manifests, become more diverse and widespread.
In assessing the work of this volume, my wish is to interpret BiReCon as the portal to a BiTopia, a brave new world where loving love is fine and binaries do not apply.  When the meanings of bisexuality are memorialized, one finds how they defeat oppositional logic on many counts.  Is bisexuality about sex or love?  Is it about the potential or the act?  Does it divide or unite?  Is it about the body or the psyche?  When we introduce the trope of bisexuality in cultural discourse, we find that we cannot ask these simple questions innocently any more.  The questions bisexuality brings up simply correspond to the binary logic that binds modern thought to an old cultural paradigm.  It takes the work of many teams of interdisciplinary scholars and researchers to generate the energetic field of interconnected minds capable of debunking that binary.  A significant amount of that work is being accomplished in this volume and the convergence of events it refers to.
Bisexuality is a modern word for expressions of the erotic among humans, expressions that are as old as human life in general.  The word is modern in the sense that it is based on the notion of sexuality.  This notion organizes what was known in antiquity as the arts of loving under a scientific aegis.  However, the practice of love among humans, and other species with a digametal, male/female system of reproduction, precedes the modern era, and transcends gender boundaries.  Love itself starts with unicellular life, where gender does not apply.[1]  As long as there is no evidence of the superiority of monosexuality, there is no reason to accept cultural constructions of “nature” that marginalize bisexuality.  In other words, bisexuality is “natural,” no matter what semiotic perspective applies.
This semiotic function of bisexuality as a hinge between eras and cultural paradigms, is what produces variance in the meaning of the word across space and time, and what grants its complexity a significant function.  For example, when referred to antiquity retroactively, the word indicates the fluctuations of erotic desire that were considered integral parts of a person’s development into adulthood.[2]  In classical Athens, one learned about the arts of love from older mentors of one’s gender, one practiced with other-gender partners.  When referred to early modernity, bisexuality indicated the performative aspects of gender that were typical of that era.  On the Elizabethan stage, for example, young men played women who played men, in a triple entendre that allowed to eschew the constraints of Christianity that labeled same-sex love unnatural.  This allowed Shakespearean actors, all men, to “play” with other men, on the stage, and–sometimes at least–behind the wings.[3]  In modernity, the b-word became associated with androgyny, a 19th century style of gender performance that enhanced the intertwined character of feminine and masculine traits in humanity.  Orlando, in Virginia Woolf’s novel by the same title, is a woman who is a man who is a woman–a transgender person as androgynous and bi as the author ever was.[4]
It’s only in the 20th century that the current emphasis on desire became emphasized.[5]  Yet, when we see bisexuality as a portal to BiTopia–the brave new world where the energy of love circulates beyond gender binaries–we understand that the force of bisexuality in discourse is the complexity of all these meanings combined.  When we think of BiTopia as the energy of a global paradigm shift from binary to inclusive, from linear to complex, from erotophobic to erotophilic, we see that bisexuality functions as a portal, not a divide.  When we imagine the world beyond this portal, we appreciate this complexity as an asset.  Love, beyond that portal, is not a need or an instinct, but an art.  In this context, bisexuality is the subtext of a bouquet of imaginative styles of erotic expression that virtually live beyond the divide, including bi, trans, poly, swing, pan, omni, gay, lesbian, goth, BDSM, metro, eco, and many others.

The venue that hosted the three combined events, UEL Dockland Campus, is a public university that serves many of the new populations of London’s extended metropolitan area.  The venue itself is significant in this context.  In England and the world today, the forces of democracy are defending public education as a foundation for the practice of democracy.  Yet basic human rights are continuously being violated precisely because not enough reliable knowledge is publicly accessible.  Sexual freedom is one of these basic rights.  In a world still dominated by the homo/hetero divide, bisexuality is an expression of sexual freedom whose significance is enhanced by the divide.  In hosting three Bi events combined, UEL accomplished its mission of auspicating democracy via public education.  The practice of bisexuality is a way that sexual freedom becomes expressed.  The study of bisexuality is a way to understand what this practice is in its multiple aspects.  When we memorialize BiReCon in this volume, we produce reliable knowledge about bisexuality and practice democracy in the form of making knowledge that is both academic and transformative accessible to the public.

The combined events were a unique opportunity to get a sense of what bisexuality is today, of its transformative potential as the third millennium comes into full swing.  Nobody knows what the future brings, and yet, we do know that the future of bisexuality is in the hands of those with the ability to think together about a third millennium where oppositional reason gives way to symbiotic reason. Symbiotic reason integrates both elements in a binary and honors the infinite diversity of the in-between, the infinite complexity of life that loves itself and sustains itself.[6]  This future will be ushered by those with the ability to respect the experience of bisexuality as a source of knowledge.  They/we have affirmed this identity and transformed it into an epistemic portal to a future without binaries.
To be continued: 3 of 8 – Cluster 1: When Bisexuality Enters the Third Millennium.  Watch out for this exciting section in a few days!  Includes comments on keynotes by Robyn Ochs, Serena Anderlini, Eric Anderson, and on event’s genesis by Meg Barker and other organizers.
Copyright and Prepublication Notice:
© Serena Anderlini-D’Onofrio, transferred to Taylor & Francis for upcoming publication in BiReCon, a selected proceedings issue of the Journal of Bisexuality.  Prepublished here courtesy of T & F.  Stay tuned for volume and buy it online!
Read the Journal of Bisexuality online, the only peer-reviewed journal dedicated to the study of all aspects on bisexuality.   Check out our latest: a provocative special-topics issue on Bisexuality and Queer Theory!
[1] My sources are Margulis and Sagan (1991 and 1997), passim.
[2] My source is Cantarella (1992), passim.
[3] Significant sources include Chedgzoy (1997), and Garber (2000), passim.
[4] For bisexual paths to an interpretation of Woolf’s fiction, I refer to Marshall (2010).
[5] For more on the history of the word bisexuality, I refer to Storr (1999).
[6] I discuss this at length in Gaia and the New Politics of Love (2009) often also seen as a manifesto for ecosexuality.
http://polyplanet.blogspot.com
Please follow and like us: