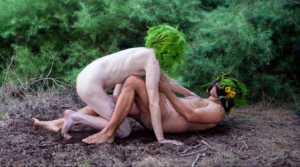 Even as American citizen, a few years ago SerenaGaia decided to try and recreate a base in our beautiful country. I recently visited her in Vidracco, in the Turin area, where she now lives. It’s the seat of Damanhur, a controversial eco village where she has been a guest, even though she’s not an integral part of the spiritual philosophical community called “the people of Damanhur.” An English couple was visiting, with their children, the underground temples that were built here. They invited us to a non-religious circle of celebrations and songs at their home. We entered their cozy bedroom, in the attic of a finely restored cottage they were renting through AirBnB. The floor is decorated with cushions, candles, inspirational books, and musical instruments. We are joined by few other friends. In the sacred circle that is created we all sing, pray, celebrate, and open our hearts and minds, as we connect to the cosmos. People pronounce words such as underground, nature, breath, a flapping of wings. When my turn to speak comes I feel quite high, full of love. I hear myself talk about how sensual it can be to walk and wander through hills and tree-lined ridges. While the shade becomes cooler and cooler, and a suave stream flows that gives life to sweet melodies. The image is that of soft open thighs where to penetrate to meet one’s pleasure.

I decide to share one of my experiences; a vision; a feeling. One day I almost cut half the tip of my finger. Without medications or bandages, I allowed nature to take its course. I was in the Canary Islands, in the middle of a rocky cove where overlapping geological layers were visible. I was amazed to notice how those piling up layers were incredibly similar to those I observed on the healing skin on my finger. For a moment I imagined myself being a tiny, invisible bacterium in my finger’s hollow. What appeared to me as immutable rock was only an insignificant moment in the course of a thousand grandiose mutations that the earth has lived in the past and will still live in the future. Perhaps that bacterium saw my finger and thought it had always been like that, just as I had forgotten that those rocks I saw were only a snapshot of a land that also changed, but with another rhythm. It grew and cracked, it collapsed, erupted, and became submerged, before humans even put a dent to it.

Who knows, perhaps even bacteria in our bowels wake up and wonder what life choices to make. Aren’t we simple bacteria in a plant’s reproductive system? Basically we are simply called to eat their juicy fruits so as to defecate their seeds at great distances. Eat, defecate, breathe, reproduce. Simple bacteria: this is how we look from the eyes of the organisms that host us. Probably one day a comet brought the first water to earth where bacteria used to live. The comet impregnated the earth with these seeds. Bacteria, the real aliens that speak to us from the stars in our guts, are nothing more than the oldest inhabitants of this planet. And they love us.

Perhaps with other visions, Eco-sexuality too 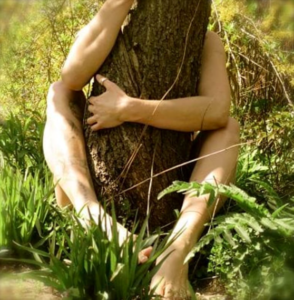 speaks about this. It speaks of an ecological relationship with our own body, of sex-toys made from recyclable materials, of nature as an erogenous space where to make love, of dialogue and sharing in dual relationships, in threesomes, and in orgiastic situations. And SerenaGaia empowers those who decide to undertake a journey that leads to the awakening of one’s consciousness through the liberation of one’s body, in union with the planet and the cosmos. A real activist of sexual liberation.

She is involved in the organization of national events by the Italian Tantra family. She has recently returned from the Angsbacka Tantra Festival, 2019, which was held in Sweden. (Tantra, an ancient mystery discipline, is about opening one’s chakras in connection with another.) She participates in and holds Cuddle Parties, which got to Italy many years ago, at least in major cities. They empower people to open up to each other, based on rules that help one feel at ease. She participates in the ISTA, International School of Temple Arts. This organization “facilitates sexual healing and a healthy attitude towards sex” through mystery and shamanic rites that place men and women in a spiritual relationship with their own bodies. She attends swingers events, and other places where one can practice free sexual expression and naturism. She does love herself, her own body and is not the very least ashamed of it.

When we meet, which happens more and more frequently since this friendship was born, we continue to chat amiably as we did that first evening in Bagniaia. By now however, after having faced together our own fears and doubts about it, it can also happen that our chatter takes place while holding hands or huddled against each other, sometimes lying down on a meadow. When conditions allow it, or we are alone in private, we also spend time naked, which we love. We cuddle, while our hands caress the beauty of each other’s scars. Our skins and bacteria meet, our hormones and pheromones dance, the oxitocin [OXT] goes up, and, simply, we speak blissfully about ourselves, about Gaia, about the stars and the world to come, which we hope will be ever more open, welcoming and cuddly.