I Fell in Love with the Piumani 1/2 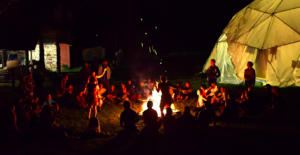 “I fell in love..” I’ve been saying as of late – and with whom? – people ask me
– with Piumani!
It is always difficult for me to explain who the Piumani are to those who do not know about them: as with anything else, Piumanitas should be experienced.

If I’m talking with foreigners, I also have to explain, in another language, the impossible triple pun implicit in the Italian neologism piumano, which is their name: “more human” [piu’ umani], “more hands” [piu’ mani] and, even more challenging, also a little bit “feather like” [piuma meaning feather]. Then I indulge in weaving on the latter considerations, as in, “because they know how to flutter like angels and they are cuddly like pillows”.

“Depth with lightness,” says as a motto at the beginning of their Piumanifesto, a manifesto written out as a rhymed poem:
Stop! Don’t throw it in the bin
it is a Piumani’s manifesto,
it serves to explain to those who don’t yet know
who these people are …
and, I swear, there are people who’ve learned it all by heart, just so they can, every time, answer this typical  question:
– I’m going to an event hosted by the Piumani . . .
– by what?!?

Yet nothing can explain exactly how featherlike it is to participate together. How can I manage to even help you imagine the strange alchemy of openness and exchange that can be created in that feathery atmosphere. Because the Piumani are after all very regular people: just as any other alternative freak who professes universal love, they are people who, seen in a normal context (for example in a queue at the post office), cannot be distinguished all that easily.  Maybe they tend to smile a bit more or be a bit more colorful than most, but sometimes they too have moments when they huff off and are pissed off. Some arevegan and some even tend to fruitarian raw fooders. Others, on the other hand, happily eat meat, drink, smoke, and don’t even recycle. Some are polyamorous, others less so; some live in ecovillages, others have normal work routines in big cities; some have “feathery” names, like Majid, Lapis, Kalish, others less so, like Lapo, Dinamite, Ama, Saggio, and still others are simply called Guido.

In short, describing them is not easy. One could tell of how they came to be, of how they were formed within the seasonal gatherings of the RIVE (Italian Network of Ecological Villages) where they brought a big load of joy, sharing, music, dances and abundant “hugs.”

From there they slowly began to organize themselves as a group, with the awareness that “the arrival of a good clown benefits the health of a city more than twenty donkeys loaded with medicines,” as Patch Adams reports quoting a 17th-century doctor.  This is why eventually the Piumanis decided to multiply their events and contributions to humankind.  Most of all, events worth saving the date for include Piumanno (New Year Piumani style) & Piumancamp (summer gathering Piumani style).  The upcoming Piumanno is planned for Dec 29-Jan 5, 2019-20 at the ecovillage Giardino della Gioia. For more detailed information about all upcoming meetings the reference email is piumaposta@gmail.com

Continued here next week: I Fell in Love with the Piumani 2/2