Dear Earthlings:
As promised, the intro to my UCHI project presented on September 12, 2012.  Check it out an watch the three beautiful clips, with a finale of a “bisexual kiss.”
I’ll stay tuned for your comments.
Introduction
Amorous Visions: Fluid Sexual Moments in Italian Cinema
Serena Anderlini-D’Onofrio, PhD 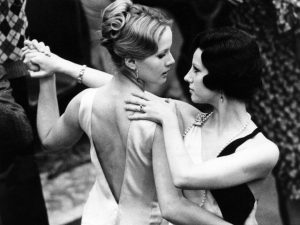 Anna and Giulia in Bertolucci’s The Conformist, 1970
Intent
Providing evidence for the argument that “sexual fluidity” and “amorous inclusiveness” are natural elements in the human expression of love.
Using Italian cinema as an art form that bears witness to that truth.
Abstract
This study articulates a new interpretation of pivotal scenes in selected classics of Italian cinema based on the cultural constructs of “amorous inclusiveness” and “sexual fluidity” elaborated in recent cultural analyses of human sexual, erotic, and amorous behavior (Ryan and Jetha 2010, Diamond 2009). These classics include Pasolini’s Teorema(1968), where a mysterious guest awakens the erotic libido of all members in a nuclear family, and Bertolucci’s The Conformist (1970), where a charming hostess similarly awakens both members of a newlywed couple. Based on these new interpretive paradigms, these scenes acquire a new meaning that discloses the bisexual and polyamorous content therein. This enables more positive and complete understandings of the films as projects that artistically express love for love, or erotophilia. As an experienced scholar who charted new research fields that study love as the art of crossing beyond sexual divides and exclusivity (BiTopia, 2011), I am uniquely prepared to articulate these interpretations.
Research and Contribution
Based on Deleuze’s postmodern philosophy of cinema (1986), a film scene is a “movement-image” that stills time for future generations of viewers and can inspire transforming practices and movements. In many classics of Italian film, these scenes reflect pre-modern belief systems that precede monogamy and hetero/homo-normativities. As the expression of a 20th century cinematic culture and tradition, Italian film encodes many of the contrasting beliefs that have historically characterized the multiple cultures that have inhabited the peninsula. For example, the notion that love is an art and desire is fluid was common in antiquity, when the modern concept of sexuality did not exist. This situation provides a fertile context for the study of a film’s diegetic structure that pivots on scenes where the socio-sexual conventions of monogamy and monosexuality are momentarily suspended. Are these cinematic moments “bisexual”? Are they “polyamorous”? In this cinematic culture a director is considered the “author” (or auteur) of a film. What do the scenes reveal about this author? Is the director’s gaze coded in them? Why do the films appear so “queer” even though they are not part of an LGBTQ film tradition? To what extent do new generations of viewers get to redefine what these moments mean? 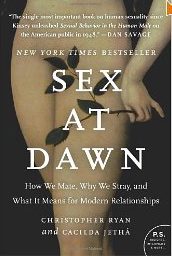 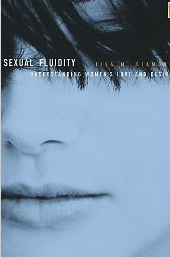 The interpretive perspective I propose is authorized by numerous recent studies of human sexual fluidity and amorous inclusiveness that converge in assessing its biological and cultural roots. Lisa Diamond’s longitudinal study of women’s sexual desire proves that sexual orientation exists alongside with variable degrees of sexual fluidity (2009). Matthew Ripley (et al.)’s study of bisexual men registers an increasing degree of comfort with this practice and identity at least in the secular world. Based on recent findings in Clinical Psychology at Northwestern University and from the Human Rights Commission, bisexual behavior turns out to be natural and healthy for a large number of humans (Rosenthal, LGBT Advisory Committee, 2011). Christopher Ryan and Cacilda Jetha’s study of the prehistoric origins of human sexuality proves that inclusive behavior in both sexual and parental love has been prevalent in human cultures and communities over the course of the prehistoric life of our species (2010). Monogamy is a social construct that becomes normative with history. Our species is not biologically programmed for it, which explains why so many people have trouble adjusting to it.
Revisiting the “Fluid,” “Inclusive” Scenes
If sexual fluidity and amorous inclusiveness are “natural” for humans, then it is a good idea to look again at classics of Italian cinema for scenes of “sexual fluidity” and “amorous inclusiveness.” What do these scenes mean? Why are they significant? What new visions do they authorize if interpreted as cinematic moments that establish an early legitimacy for behaviors subsequently found to be natural for our species? Why do we still so often perceive these behaviors as “queer”? Can our vision of what is natural transform to include these behaviors too? How does the authority of new science about sexual fluidity and amorous inclusiveness in humans legitimate these new visions? These are questions in my mind as I plan to revisit the erotic awakening of Francesca and Silvana in Riso amaro (1948); the one the guest bestows on the frigid nuclear family members of Pasolini’s Teorema(1968).  The charming French hostess, in Bertolucci’s The Conformist(1970) similarly awakens the newlywed Italian couple writhing with erotophobia from the Fascist regime; and a number of other similar scenes.
Silvana and Francesca bond as confidantes in Riso Amaro
Anna and Giulia dance together in The Conformist
As the new paradigms of “sexual fluidity” and “amorous inclusiveness” are put to work toward interpretations of classics of Italian cinema whose world fame exceeds their original cultural location, these interpretations will bring up unsuspected continuities. Binaries around which human sexual, erotic, and amorous behaviors have been organized include homosexuality and heterosexuality, monogamy and polyamory, modernity and antiquity. The cultural polarizations these binaries produce are in the way of envisaging worlds beyond these binaries. Directors whose key scenes represent “fluid” and “inclusive” moments produce visions of worlds possible beyond these binaries, were love for love, or erotophilia, prevails over erotophobia, or fear of love.  A recent example of this is the fluid, inclusive kiss scene in Ferzan Ozpetek The Ignorant Fairies (2001).
Antonia and Michele exchange a “bisexual kiss” in The Ignorant Fairies
The Million Dollar Question:
How can we create a world where Massimo, the shared lover who binds Michele and Antonia erotically, wouldn’t have to be dead for Michele and Antonia to kiss?
How can humanities-based interdisciplinary research help to make this happen?
Thank you!
Work Cited List
Primary Sources
Bertolucci, Bernardo.  Il conformista/The Conformist.  Rome: Green Film, 1970.
De Santis, Giuseppe.  Riso amaro/Bitter Rice.  Rome: Lux, 1948.
Ozpetek, Ferzan.  Le fate ignoranti/His Secret Life.  Rome: Medusa, 2001.
Pasolini, Pier Paolo.  Teorema.  Rome: Aetos Film, 1968.
Secondary Sources
Anderlini-D’Onofrio, Serena.  “Bisexual Games and Emotional Sustainability in Ferzan Ozpetek’s Queer Films.”  New Cinemas: Journal of Contemporary Film: 2: 3 (2004): 163-174.
Anderlini-D’Onofrio, Serena.  Gaia and the New Politics of Love: Notes for a Poly Planet.  Berkeley: North Atlantic Books, 2009.
______  ed.  BiTopia: Selected Proceedings from BiReCon 2010.  Routledge, 2011.
Deleuze, Gilles. Cinema 1: The Movement-Image.  Tomlinson, Hugh, tr.  Minneapolis: University of Minnesota Press, 1986.
______  .  Cinema 2: The Time-Image.  Tomlinson, Hugh, tr.  Minneapolis: University of Minnesota press, 1989.
Diamond, Lisa.  Sexual Fluidity: Understanding Women’s Love and Desire.  Cambridge: Harvard UP, 2008.
LGBT Advisory Committee.  Bisexual Invisibility: Impacts and Recommendations.  San Francisco: Human Rights Commission, 2011.
Ripley, Matthew, Adrian Adams, Robin Pitts, Eric Anderson.  “The Decreasing Significance of Stigma in the Lives of Bisexual Men: Keynote Address.”  In BiTopia: Selected Proceedings from BiReCon.  New York: Routledge, 2011.
Ryan, Christopher and Cacilda Jetha.  Sex at Dawn: The Prehistoric Origins of Modern Sexuality.  New York: Harper, 2010.  Kindle Edition.
Dear Earthlings,

Remember to come back on Thursdays for more snippets of what yours truly is up to.

Want to know more about yours truly’s new book? What Is Love dares to engage the million dollar question!  Would like to pre-read?  Find out how to endorse the book here.
Education is the heart of democracy, education to love.  Come back for more wonders.

Serena Anderlini-D’Onofrio, PhD
Author of Gaia, Eros, and many other books about love
Fellow at UCHI